I love to Teach!

I completed a Postgraduate Certificate in Education (PGCE)  at the University of Oxford. Subsequently, I started my professional life as a teacher of English to 13-18 year olds and proceeded to train teachers at DMU’s erstwhile Bedford Campus, co-editing Learning to Teach English in the Secondary School (1999, repr. 2003, 2006, 2009) that is still a staple text on teacher education programmes. Hence, reflective teaching is an enthusiasm I brought to Higher Education.

I I have taught undergraduate courses on all the genres, poetry, the novel, and drama. I initiated specialist modules on Shakespeare and Women's Writing. Latterly, I shaped, led and taught these research-led courses: 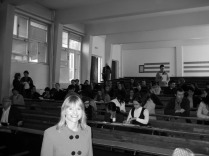 This award is based on students' votes. I received it in its inaugural year, and was nominated for it in each subsequent year.

'Jane supported me in my transition from language to literature last year by showing me how to construct an essay. she was on the end of an email or telephone constantly and boosted my grade from a 2:2 to a first. she gave me a love of modernism and 20/21st literature, particularly Ali Smith. she allowed me to find my own way through the reading material but gave me feedback to ensure I was heading in the right direction. Jane is an amazing teacher. she is thorough, caring and so intelligent, patient and kind. If it wasn't for Jane, I don't think the second year would have been as fun for me. I fully believe she deserves a huge award!!'

What my students said about me

I have brought to successful completion several PhD candidates who include:

I have been internal examiner for numerous candidates across the Humanities and externally examined several Ph.D theses at such universities as Glasgow, Warwick, Birmingham, Leicester, and Edge Hill.